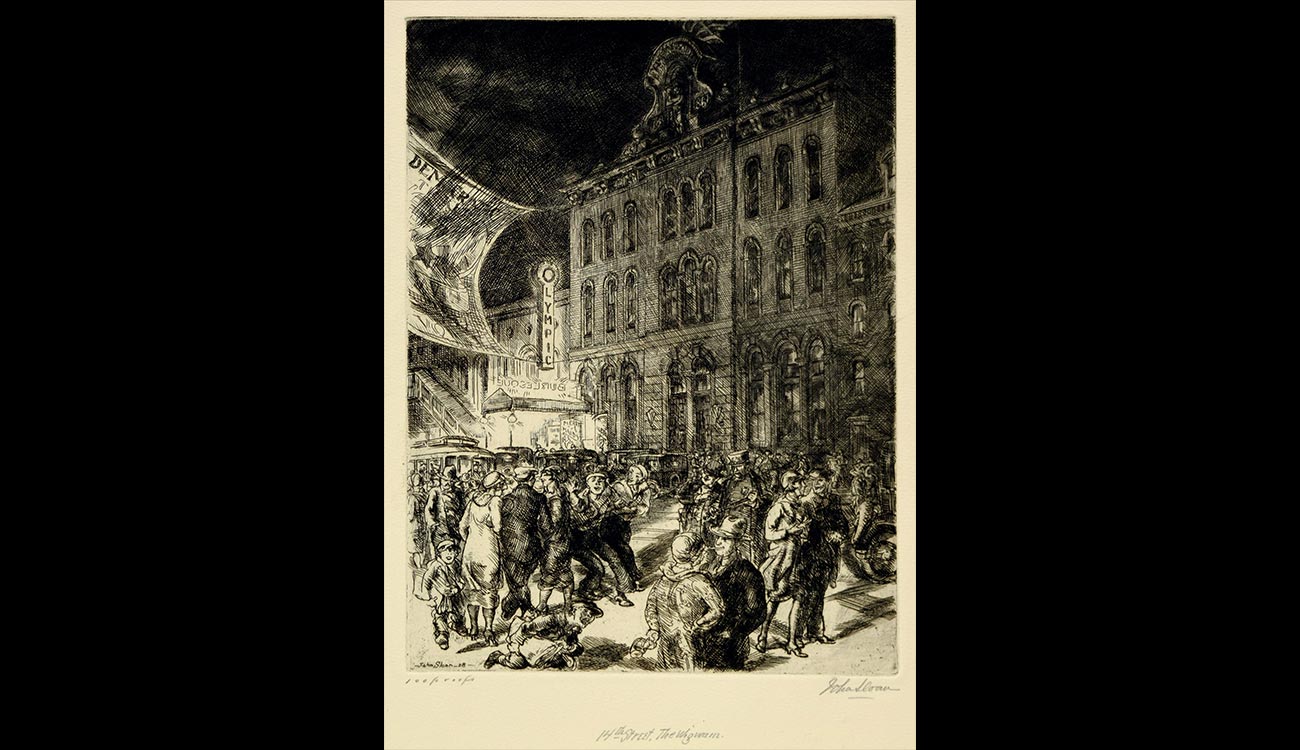 John French Sloan was born and raised in Lock Haven, PA on Augusts 2, 1871. Many of his works, including The Hairdresser’s Window, The Picnic Ground, and The Haymarket wereinspired by his hometown. By the age of 12, Sloan was already at work experimenting with ink, watercolor, and pencil when he added his own illustrations to his Treasure Island book. As a young man, Sloan was forced to leave Central High School to support his family by working for book and fine art print seller Porter and Coates – an opportunity which afforded him direct interaction with prints by Dürer and Rembrandt, which he would spend his spare time studying and copying.  At the same time he taught himself etching, and his prints were sold for a modest sum in the bookstore.  In 1890 his talents led him to an opportunity to work for A. Edward Newton, illustrating cards and calendars. By 1892, he was working as an illustrator in the art department of The Philadelphia Inquirer.

While in his 20’s, Sloan rented a studio along with fellow illustrator, Joe Laub. During this time, Sloan enrolled at the Pennsylvania Academy of the Fine Arts to further practice his craft in designing, etching, illustrating, advertising sketches, and lettering. He eventually found influence in Robert Henri, who he met at the Academy. It was Henri who pushed Sloan to paint more seriously, exploring and promoting a new form of realism known as the “Ashcan school.”

It was due to an ailing father and need to support his sisters that Sloan moved to New York City in 1904. By the time he had moved to New York, he had acquired quite a reputation as an illustrator. It was here that he created his New York City Life set which chronicled the daily, typically humorous, scenes around the streets and neighborhood where Sloan lived.  14th Street, The Wigwam, 1928, in The Museum’s permanent collection,is an example of this vein of his work.

Sloan eventually found himself joining the Socialist Party in 1910 and produced work inspired by the movement between 1911 and 1914. One such work was titled The Triangle Shirtwaist Factory Fire in which it “memorialized the horrific death of garment workers in his neighborhood”.

Later in life, Sloan slowed down in his illustrative work and took up teaching at the Art Students League in New York City. He did a few more illustrations for Edgar Lee Masters, Max Miller, and W. Somerset Maugham.